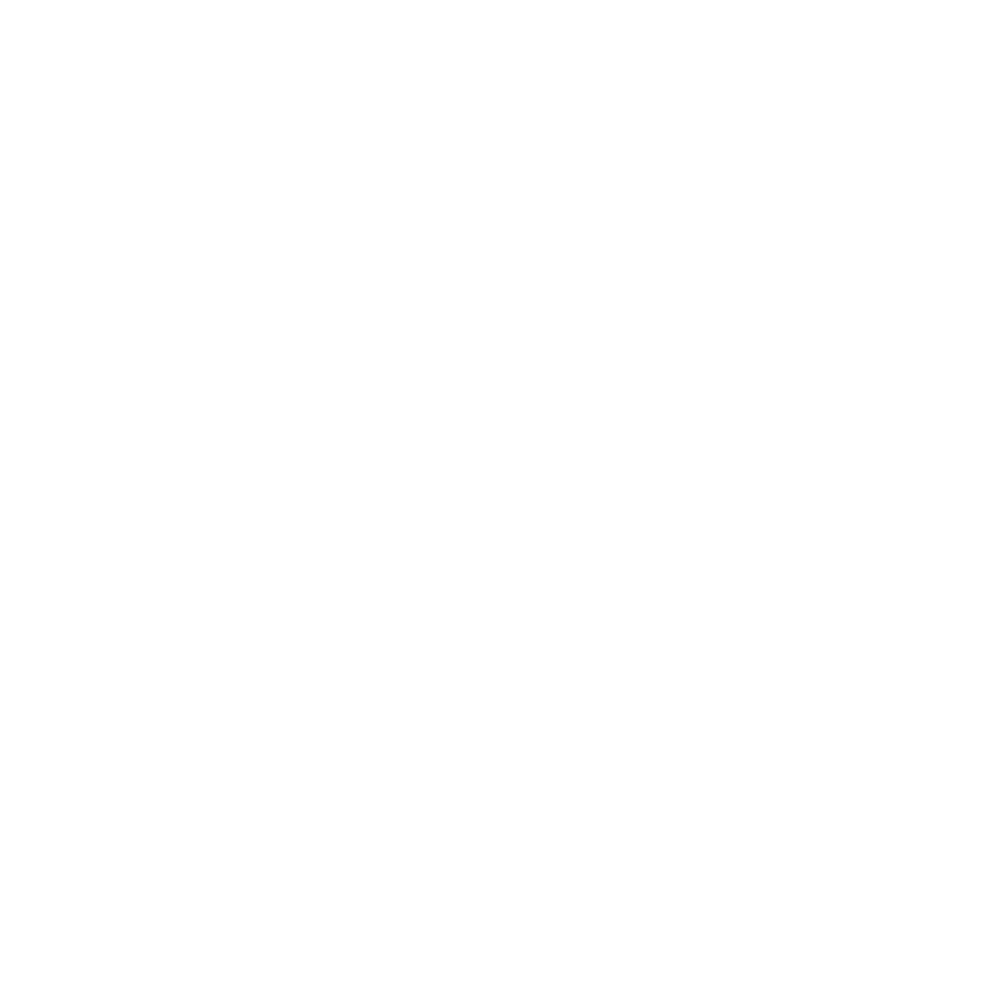 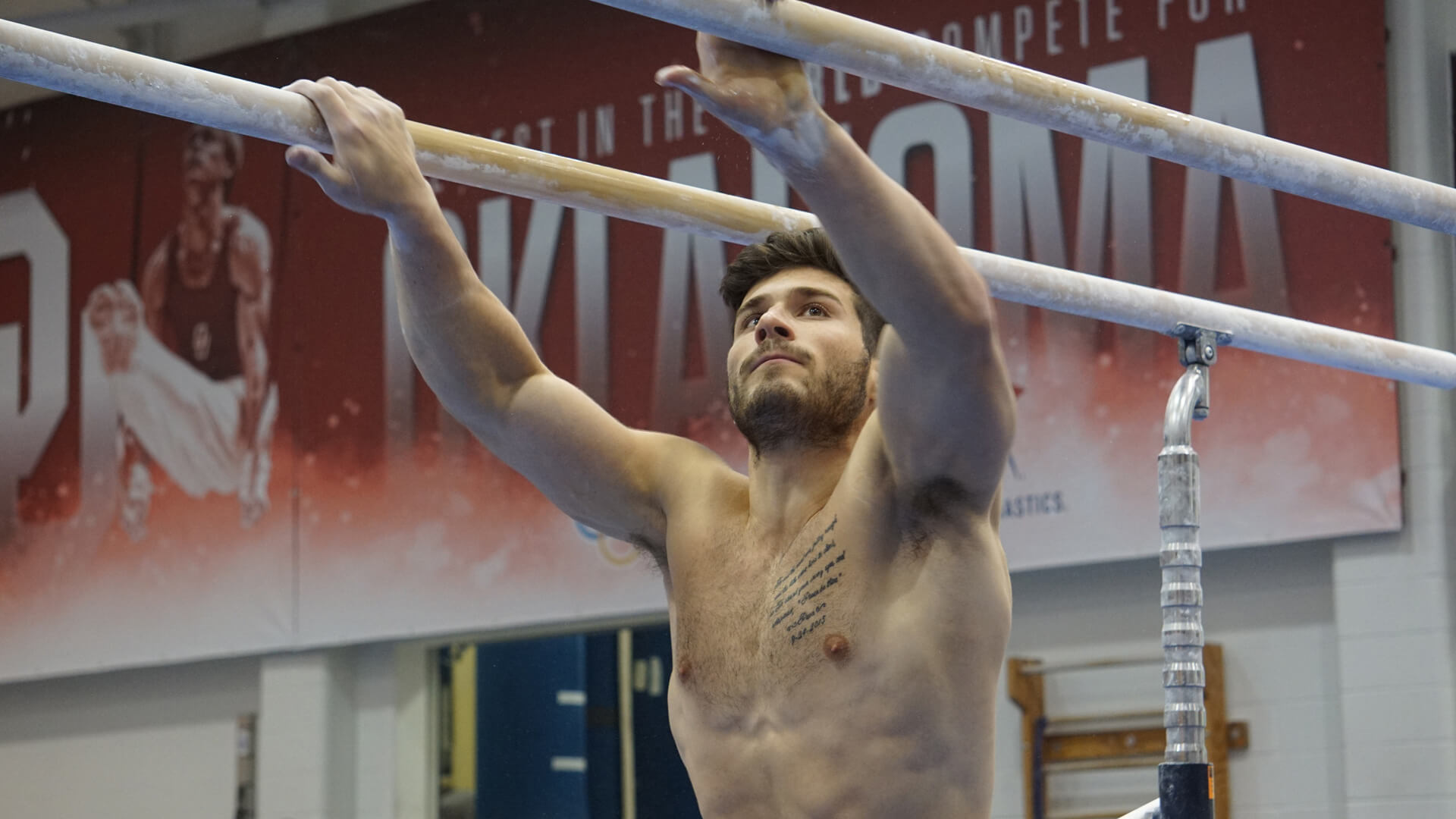 You Won't See Me Quit

Everything happens for a reason.

That oft-used statement is the only way of making sense of my path towards retiring as a male gymnast in my senior year of college.

I never quit fighting, and I never gave up.

It was simply a case of my body no longer being able to take the punishment.

There’s no shame in being human, and no dishonor in bowing out before life as you know it is irreparably damaged.

Multiple surgeries and a spinal cord injury had me asking the kind of questions that would shake any man to his core.

What if I never walk again?

My toughness put me on the path towards greatness, but it couldn’t save me from the realities of flesh and bone. The human body has its limits, and I pushed the pedal to the metal and found out exactly how far mine could go.

That pedal-to-the-metal mentality stems from childhood. It’s one of the reasons my parents signed me and brother, Hunter, up for gymnastics in the first place. We needed an outlet for our endless waves of energy.

However, what started out as a side sport to release pent-up energy quickly morphed into a lifelong goal.

We were both really good in competition, and there was the possibility of landing a future scholarship. So the side sport suddenly turned into an everyday sport.

Landing an athletic scholarship and competing in college is nearly every kid’s dream growing up. Few things were cooler than being a part of that college athletic life.

My aspirations were emboldened when meeting up with many of my former teammates that had gone on to sign at Oklahoma.

That school was a major pipeline for my home gym. They would always come home for Thanksgiving, Christmas, and summer break to tell us stories of what it was like competing, being on your ow,n and all of the things any high school student would ponder about the college experience.

That’s probably where I learned most about gymnastics. 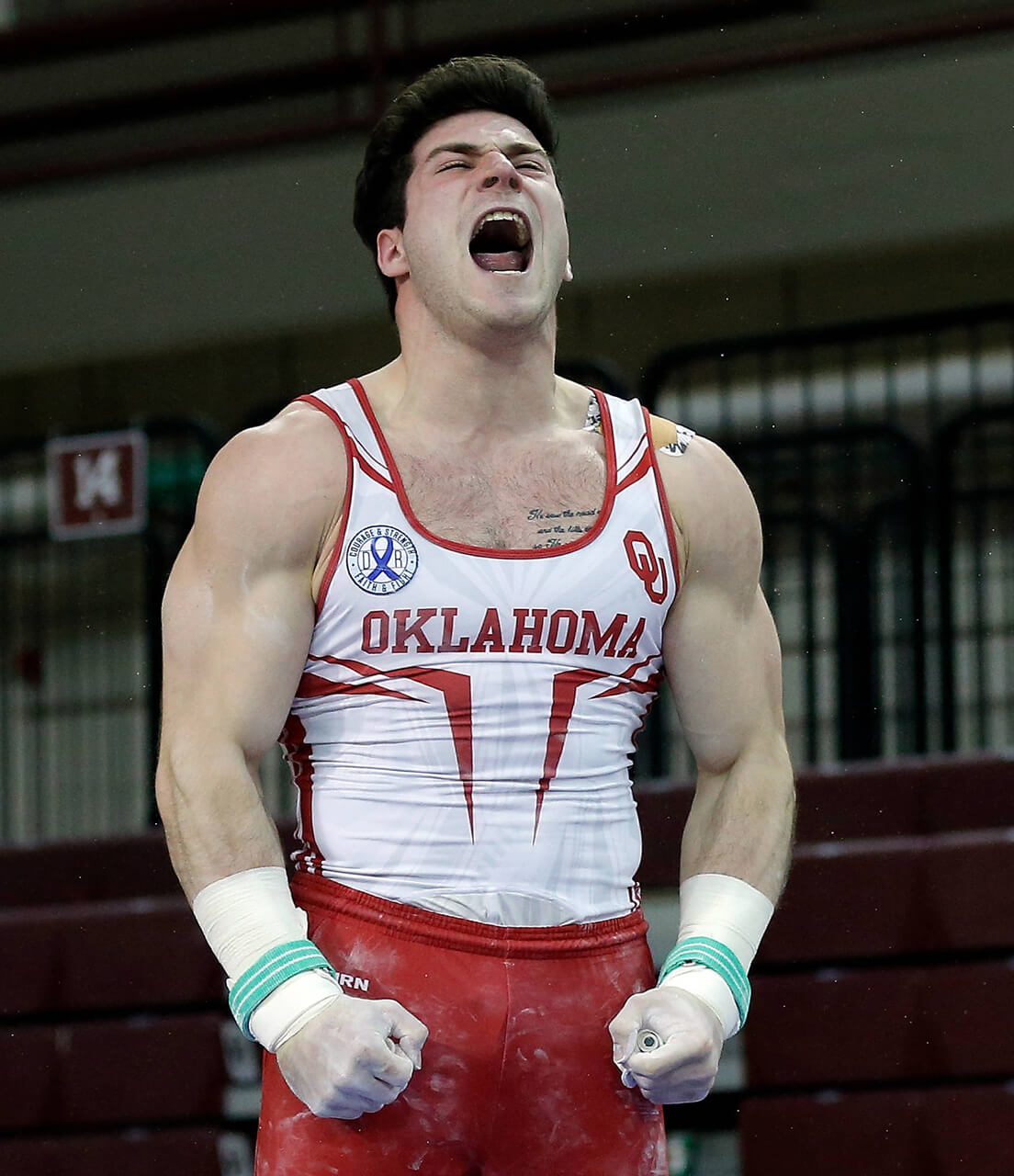 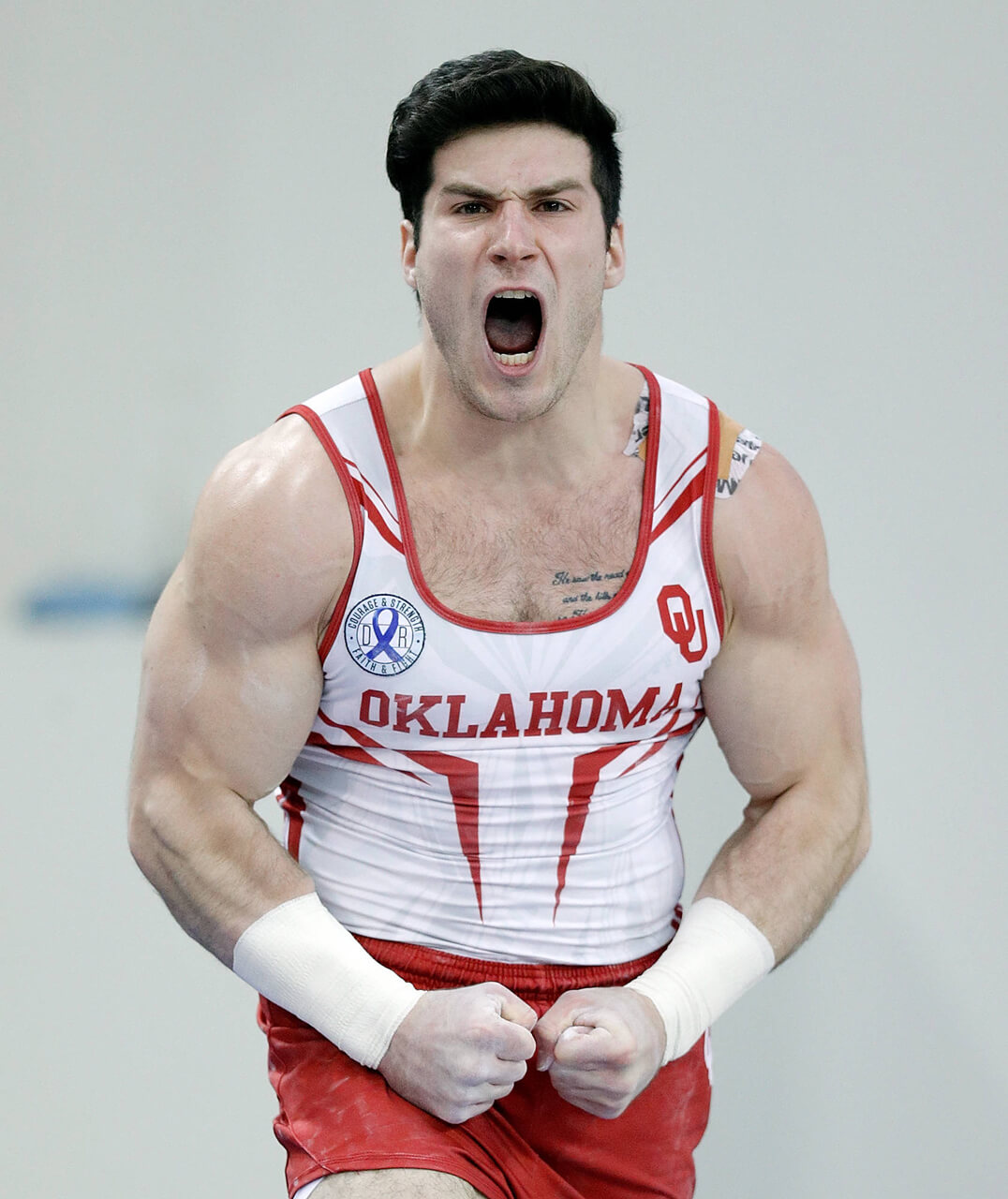 The other hardened lesson that came my way was from U.S. Olympian Jonathan Horton.

I was always at the top of my age group all-around, but things took a nosedive in my freshman and sophomore years of high school. I hit a rapid growth spurt and started putting on the sort of weight my body wasn’t ready to handle.

My work ethic was also lacking. I was a young kid that would screw around and not practice as much as I should. I’ll never forget Jonathan telling me if I didn’t stop screwing around, I wasn’t going to receive anything but a book scholarship.

That conversation was impactful enough to flip a switch in me and push me towards taking training more seriously. I started doing stuff to help my body keep up with the growing to the point where I really started to take off in my junior and senior years.

Aside from Oklahoma being one of the premier college gymnasics programs in the country, my decision to be a Sooner stemmed from my gym’s connection with the school, and due to Hunter also deciding to attend there.

I knew I wanted to stay with my family and be closer to my brother.

Oklahoma gave me the best of both worlds: family and familiarity.

A Trial By Fire

Things didn’t get off to a great start in my first year at college.

I underwent a surgery within the first two weeks of my freshman year to repair a shoulder injury from high school.

So I was further behind than I would have liked to be during the preseason. The jump from club gymnastics to college athletics was already hard enough, especially at a prestigious school like Oklahoma.

It made for an incredibly challenging semester. I went from competing in all-around events to being limited to the lineup for only vault and floor.

There were many lessons I took away as a college athlete, but the first one was the value of teamwork. I accepted the fact that I might not be in every lineup. So I shifted my focus towards things that were going to help me contribute to a team with a deep roster.

The next lesson came in the form of the team captain screaming at me at the top of his lungs and basically letting me have it in front of everyone in the gym. I won’t repeat exactly what was said, but let’s just say I had a come-to-Jesus moment.

It was honestly the moment that changed my entire career.

It was a Sunday practice, and we each had a small assignment. After finishing my assignment, I got on the floor to catch my breath and rest my aching body. The team captain saw it and didn’t like it. At that moment, I decided to put my pride aside and realized I was a nobody on that team compared to a lot of the guys.

Sure, I’d competed on a national team and completed multiple international assignments, but what I did in high school didn’t matter at the collegiate level. I had to earn the respect of my new teammates.

Everything changed from that moment forward.

I was one of the first to show up and last to leave the gym every single day. That moment set my career on the right path, and I started pushing lineups in more than just floor and vault.

But even the right mindset couldn’t save me from the onslaught of injuries. I was forced to undergo two more surgeries to repair a knee and wrist injury heading into my sophomore year.

I maintained the same mindset that I had in high school of pushing surgeries off until the last minute and battling through the sort of injuries that would end most seasons.

It wasn’t until my junior year when I really started to see my breakthrough as an athlete. It was the greatest season of my gymnastics career with me even posting the top-four all-around score that year in the country.

I was thinking my time had finally arrived. Through all of the ups and downs, I was ready to take flight for the world to see on the collegiate stage.

And then I tore my bicep and labrum in the middle of the season.

That brought me back to the “screw-this-mentality.” I was finally putting everything together, and I wasn’t about to sit out again and have everything taken away from me. So I waited until the week after nationals to have the surgery. Of course, the surgery only lasted a good four months before I tore the same bicep again.

That’s when I started to question how much more my body could take. But I still couldn’t push myself to walk away. Even when the medical staff told me the muscle was shredded beyond repair, I decided to leave it alone and rehab enough to still try to compete.

The Right Time To Walk Away

It was pretty obvious at that point I was never going to quit.

I was willing to walk through fire to continue competing alongside my teammates.

Then a nagging back injury during my junior year eventually worsened to the point of bringing me down to a humbling reality. I might have thought I was invincible, but my body had finally had enough. I tried to fight through the pain during my senior year, but it was the one injury I couldn’t push through. I remember sitting on the floor with my legs numbed at a preseason event, pondering what would happen to my collegiate career.

After getting what felt like my millionth MRI, I vividly recall the doctor telling me he’d advise his son not to compete again if he were in my situation.

There was damage to my spinal cord that could potentially lead to me being paralyzed if I took another bad fall. I’d never live a normal life again.

It was one of the biggest things I’ve ever had to overcome when I had to make the decision to retire.

Coming off what was easily the best season of my career, it was such a crushing way to end things. Of course, not long after that, the NCAA season was canceled due to the Coronavirus pandemic.

What are the odds that the entire season would end in the same year I had my season taken away from me? It blew my mind. Perhaps the only silver lining was me being in a position to offer words of encouragement to my teammates after already going through the emotions of an early end to the season.

Don’t get me wrong, I’m not sharing my experiences because I want people to feel bad for me. I’m doing so in hopes of inspiring other athletes but also helping them realize that it’s okay to stop when more important things are at stake.

I put in countless hours of work into rehab and reshaping my body since freshmen year.

Every single one of my surgeries continued to have an impact on my body almost on a daily basis.

Starting my sophomore year, I was pretty much in the training room every single day. Keep in mind, when you have surgery, that body part is never going to be the same again. The pain I put my body through was gruesome, and so was the mental fight of coming back every single time.

But after four surgeries, and being at the brink of risking my future, it simply was enough.

Looking Back With No Regrets

I’ve come to the realization that there’s more to life than gymnastics.

There are bigger problems in the world right now, and I want to be healthy enough to enjoy my life when things clear up.

No matter how bad I want to win and compete, it’s not worth potentially risking my life. I never wanted to be looked at as a quitter. That’s what I prided myself on—the ability to persevere and push through injuries. My dad instilled an unwavering work ethic in both me and Hunter.

But I had to walk away.

I’m graduating in December, and I plan on hopefully joining my brother in Houston as a sales representative for a dental supply company. He already has me super excited about it the same way he did when he talked about Oklahoma.

Knowing everything I know right now, I’d still say yes to college gymnastics and join him on that crazy journey. Everything that happened along the way helped shape me into the person I am today. It gave me the ability to push myself through any obstacles in life. I wear my scars as badges of honor, rather than stitched imperfections of regret.

Give me a pen, ink, and a blank book of my life-I wouldn’t change a thing.